For anyone who had asked me about my goal for the Ironman I was training for, the answer was ‘sub 11’. Like wanting to go ‘sub 12’ for the first Ironman, sub 11 seems to pop up a lot for those who managed a sub 12 on their first. Busselton looked ideal, fastest available IM in Australia, mainly flat. Even though I had a great Duathlon that day, I couldn’t take the result as my sub 11 – I will keep my sub 10 Tinman though!

So after getting approval to delay my retirement the next question was where to use my $200 Busso discount – Port Mac or Cairns? Port Mac was closer, cheaper and sooner but four out of the last five years people racing at my pace had an average finish time of 11:15 but Cairns was the opposite with four out of five being 10:50 or better…so off to Cairns I go!

Fast forward to three weeks before the event and I get the mother of all man flus – no training for two weeks, any attempt to train makes things worse. Ten days out I get a new present, two one hour episodes of skipped heart beats! One week out I go for my last sauna for heat acclimatisation and afterwards come within a few seconds of passing out in the change room! My confidence took a serious battering those last three weeks and instead of tapering the last week was more of a build to race day and I had no idea how much I would have in the tank. Angelo was great at reminding me that I had already done all the hard work and pushing now was more likely to hurt than help.

Thankfully everything up to race day went smooth and there I am with Tim ‘Sticks’ Stickley on the beach walking towards the start line. I realised too late we were in the same start chute so I did the gentlemanly thing and let the First Timer go first – little did I know how that would affect our finish! The swim was tough with quite a lot of chop and a strong current for the first half of the swim. Still unsure of my capacity I didn’t push too hard and apart from a big punch in the eye from a fellow competitor all went ok. Going round the half way buoys I was happy to spot Sticks, I hoped that one of us was on target! Easy swim back with the wind and current behind us now, out of the water, grab the bag and there’s Sticks again, I have made a whopping 10 seconds on him in 1:13. A bit slower than I would like but at least I feel good and can now push the bike effort.

Beautiful course for the bike, big hi and a thumbs up to our awesome supporters on the way out of Palm Cove then head down and time to take in the scenery…more like a seemingly endless cycle of ‘Check Power, Check HR, Time to eat?, Time to drink?’. It was great to see fellow Nunas out on the course and give a wave and a share couple of words of encouragement. Racing using Power can be tricky, if you catch someone aiming for the same pace it can be hard to get enough space to not worry about drafting, at one stage I had to pull away from a group because someone else kept staying too close to other riders the TO’s had a friendly word with him – no way I’m getting tarred with that brush! In keeping with the theme of the day I caught Sticks and we spent most of the second half of the ride trading the lead – in a totally legal and non-drafting manner of course… He clearly had some tricks left though as I was catching him on one of the climbs he managed to make my chain drop and I didn’t see him for another 30kms. Overall I felt ok on the bike, hoping that I had left enough in the tank to have a good run. Naturally Sticks came in right behind me on the bike, I was fully expecting for him to smash me on the run and was hoping he wasn’t thinking I’d be keeping up with him! At least the bike was done more or less on target at 5:31, no time in the bank though for the run.

Smooth T2, no mucking around and a quick chat with Sticks as we get changed. Run past the crowds at the Start/Finish for the first of three laps, heaps of noise and Nuna Supporters. Awesome to see partner Kym and son Henry for the first time since I got up, I would see them a few more times before the finish. Sticks was not far behind and I could see at each turn he was getting closer, this was of no concern, I figured he would be running way faster than me so when he went past about 5kms in I just let him go and kept to my plan. Each turn around he would get a bit further away eventually getting out to about 1km. I had enough to worry about with wanting to finish under 11 hours so needed to keep a close eye on my splits but my watch had been playing up since the end of the ride. I reset it but the GPS was on high accuracy and killed the battery. Sure enough it shut down about 15kms in which caused a bit of panic but luckily Talia was on the course cheering and her watch had enough battery for me to track my splits – even in swim mode as it turned out. Thanks again Talia! I had a word with Ange as he ran past, he was in a world of hurt but kept going like a trooper anyway. Nutrition was tough on the run, the Isowhey was way too sharp for me and warm Red Bull not much better so after 2 cups I gave up and switched to coke and salt tablets, thankful I had brought extra tablets as a precaution.

Coming to the last 10kms I realised I still didn’t know if I could hit sub 11 and made Rosi chase after me to tell me the time so I could get an idea. I had an hour to get it done, normally I would need about 1:15. I started telling myself quietly to ‘kick’ every few hundred metres, getting louder and more forceful as I got closer to the finish which probably sounded weird to the people around me but I knew the body would go if it ignored my brain and blindly followed orders. Also very helpful was forcing myself to smile and telling myself pain is temporary. I found out from Dom Strickland that I was actually catching Sticks which for the first time of the day gave me something extra to push towards. Catching Sticks near the finish I didn’t want to break my momentum so a couple of quick words it was ‘Kick!’ and off I went again. Thankfully he caught me and we decided to finish together which was definitely the highlight of the day as we also came in a couple of minutes under 11 hours, woohooh!

Super happy to get it done under challenging conditions, pushing hard all the way to the finish and hitting the target time. Awesome support on the day from the Nuna support crew and the 70.3 racers plus endless support from Kym and Henry over the last year for Busselton then Cairns.

There are no upcoming events at this time. 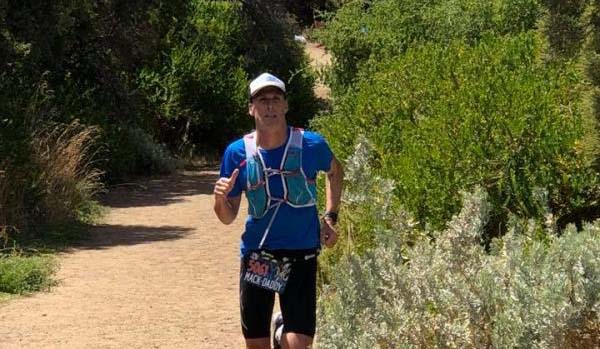 My two bays race this year had an

My two bays race this year had an